skip to main | skip to sidebar

Thank you for the tip, S. Stonebridge.
Some Idahoan mashed potatoes contain coconut oil.  Make sure to read all ingredients on all packaged food!
For example, the "buttery golden selects" seem to be sharing secrets on making buttery flavor from our old nemesis, movie theater popcorn! 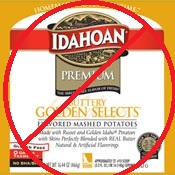 Our friends at Morrocco Method sent me a sample of their Chi Essence Shampoo and Pearl Essence Creme Rinse to try out and review honestly.  In the end, I liked them both in some ways. . . but they are not mainstream and definitely not what I am used to.  But, some are COCONUT FREE.

The Morrocco Method website has special instructions about shampooing and de-toxing your hair, which I skimmed over before using the products.  I used them together, and separately, and tried them a few times.

First, the SHAMPOO!  It is a little bit gritty, and it doesn't lather.  You have to use your fingers like a superstar salon shampooer to work it around your scalp.  Then rinse, and do it again.  Once the water gets in there with the shampoo, it works pretty well.  It smells mildly eucalyptus-like, but it doesn't have any smell at all after it rinses out. Once my hair dried the first time I used it, it seemed matted down.  It was greasy, matted, and static-y all at the same time.  It was yucky- like my hair had just soaked it all up and wasn't letting any of it go. But, my scalp was ironically totally clean. My scalp was feeling better than ever.  It didn't have that gross scalp build up that all the other shampoos leave behind. It was my actual hair that was nasty.   THEN, the second time I used it, it was much better.  By the FOURTH time I used it about 10 days later,  my hair was amazing.  A MAZ ING.  I never thought I would have a trial of faith by shampoo, but in the end, this one came through.  In theory, what happened was my hair going through detoxification. After my hair reached some sort of equilibrium, it was super happy, swingy, and healthy without being the least bit weighed down or greasy.  It also seems thicker, not all stripped out anymore.
Second, the CREAM RINSE.  I used about a nickel-sized amount because I have long, fine hair and usually need quite a bit of conditioning.  It did add a healthy amount of weight to my hair and made it take a little longer to dry, but it looked like sparkly mermaid hair.  Mermaid hair was actually my exact thought.  Then, I noticed that there is actually a mermaid on the bottle. Duh.  When you squirt the conditioner out of the bottle and initially smell it, it has the distinct scent of shea butter - which I would describe as a sunscreen-type smell.  However, the craziest thing happens when you rub it in your hair.  It turns into a strong, overpowering sandalwood incense smell (I think it's probably actually cedarwood since that is what is listed in the ingredients).  Definitely NOT my favorite smell.  It was like I had a cone of burning incense instead of a head.  I am not going to scientifically blame it for giving me a headache every time I used it, but it probably did.  My husband started actually teasing me about how strong it smelled even two days after using it.  But, if you like the smell, it is a very luscious conditioner.

They have sample sizes if you want to try them out for a week or two before making a plunge on a whole bottle.  I think I'll write to Santa to see if he'll leave some more of the shampoo in my stocking!
Posted by Becky at 9:33 AM 14 comments:

I am not a medical doctor. Any advice I give should not be considered medical advice. Please consult with a doctor if you have medical questions.